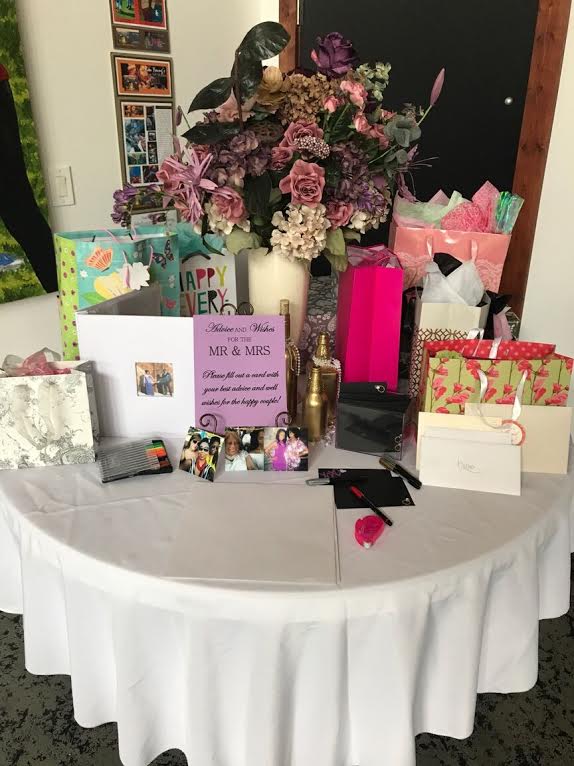 After making the decision to have a local bridal shower, my aunt and five of my close girlfriends began planning.  I located the venue — at the recommendation of another girlfriend, created a guest list, provided my food/dessert/libation requests and was then completely removed from the planning process. Relinquishing control, I’ll admit was hard, but as my bridal shower date approached, the more relieved I was that all I had to do was look cute and show up to the shower!

The bridal shower day arrived and the day was busy from the start. That morning, my daughter Ava had two basketball games. Plus, I had several girlfriends coming in town —  two of whom were spending the weekend at my house. My parents, aunt and younger cousin also came in town and we all met at Ava’s basketball game. My two girlfriends staying at my home left Ava’s second game early so they could head back to my house to get dressed and arrive at the shower venue to begin decorating.

After the game, realizing that I still had a few beauty errands to make before the shower, my mom, aunt, Ava and my cousin headed to the mall. As we were leaving the mall, my mom realized that her change of clothes was in her car which Vlad and my Dad were now in. Luckily, the fellas were eating lunch near the mall. We picked up the clothes and fast tracked to my house, as it was now nearing 1 p.m. and the shower was scheduled to begin at 2 p.m. About 10 minutes from my house, I realized that I didn’t have my house keys —  I gave them to my friends so they could get in the house while we were still at the basketball game.

I called Vlad and he and my Dad sped to our home to let us in to change. By the time they made it to the house, it was 1:45 p.m. I called my shower planning committee and let them know that I would be arriving to the shower late. Hair and makeup complete, I started getting dressed. Dress on, but it would not zip! At this point, it’s 2:05 p.m. and I’m really starting to panic. I call my cousin who can’t get the zipper to budge. My aunt tries, then my mom and aunt try together….Bam! Dress zipped — thankfully, because ya’ girl didn’t have a backup.  2:15 p.m. and we are heading out the door.

We made it to the shower at 2:40 p.m. and all of my guests thought it was a timed entrance. If they only knew the backstory! I walked into a beautifully decorated room of 30 people — family, friends and current and former co-workers. The food, desserts and wine were amazing. The games were fun and the fellowship was priceless.

I was, and still am overwhelmed by all of the love that I was showered with at my bridal shower that almost didn’t happen.

…And the little bit of pre-bridal shower drama — probably just a precursor for little bit of wedding day drama that I’ve been told to brace myself for. 😊

For destination weddings, are local bridal showers necessary? Did you have any pre-bridal shower drama?