Tia Mowry and Cory Hardrict aren’t the only celebrities renewing their vows these days. Tamela and David Mann, of Tyler Perry fame, said “I Do, Again” in Dallas, Texas, on April 20th! When the couple first wed back in 1988, they didn’t have a formal wedding ceremony and their pastor  actually wed the pair in his study. Tamela told US Weekly, “We didn’t have enough money for a wedding.” Apparently the screen star even had to borrow a ring back then. 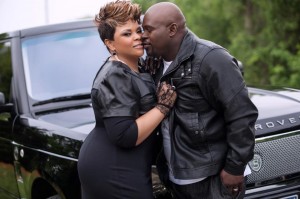 Fast forward to 2013: The bride spent months working with Binzario Couture to design her dream wedding gown, the guest list included the couple’s high school friend Kirk Franklin and his wife Tammy, as well as Timbaland and his wife Monique and the wedding cake was provided by TLC stars, The Cake Guys.

Each of the couple’s grandchildren participated in the ceremony. Tamela says, “Our grand babies were dressed as little princes and princesses.” (The couple have three daughters and one son.) She adds that she and David were trying to create a feeling that was “old-world romantic, beautiful, chic and lush.” It appears as though KP Event Designers in Dallas, TX helped the couple do just that — the Grammy winners were able to incorporate live trees and “all kinds of flowers” in the decor at the Joule Hotel where their affair took place. Tamela reveals, “[The Joule] had space for a dance floor, which if you know David, was something we had to have!”

Triple B wishes the happy couple many more years of health and happiness!

[Wedding image courtesy of US Weekly.]